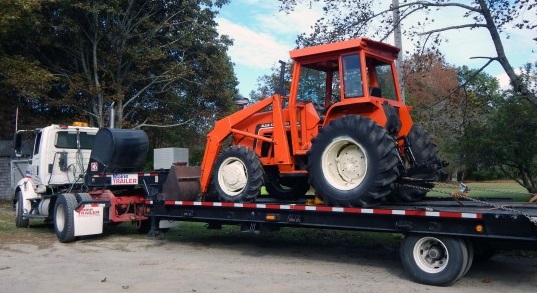 Glenburn, Maine - Starting a farm is hard work.  It is even harder when your combat injuries make even normal tasks complicated.  This week, thanks to the generosity of several parties, a highly decorated Glenburn, Maine Army combat veteran Maj. Rob Jones received a large Allis Chalmers 60 HP tractor delivered to his farm to make his work a little easier.

At age 20, Robert R. Jones enlisted in the US Army from Orono, Maine and served for over 4 years before taking a planned break in service for school.  Jones re-entered active duty as a commissioned officer in January 1999.   He volunteered for two combat tours in Iraq and Afghanistan as a chemical specialist. Throughout his tours in combat he has received numerous awards, including two Bronze Stars, and four Army Commendation Medals. Unfortunately, his combat duties left him with many injuries, resulting in over 20 medical conditions. Including PTSD, traumatic brain injury (TBI), cervical spine issues, and two surgically repaired shoulders. The TBI was initially a result of an (IED) Improvised Explosive Device blast and has been exacerbated by a number of additional exposures to blasts and some falls caused by the vertigo he experiences.

After nearly 16 years of military service, Jones medically retired in 2015 at the rank of Major with a 100% disability rating.   Major Jones returned to his native Maine following his medical treatment and purchased a 30 –acre run-down farm in Glenburn Maine where he lives with his wife and two children.

“Thanks so much for the wonderful gift,” said Jones.   “I truly appreciate it and it will absolutely reduce the financial burden of making our farm a success.”   His business plan for the farm includes a future veteran equine therapy program, as well as a sugar house, livestock and a greenhouse.

“We are proud to help such a deserving combat veteran,” says Cathy Cook, Executive Director of Work Vessels for Vets, an all-volunteer charity out of Noank, Connecticut.  “Often we find that a small investment on our part leads to greater independence and a fulfilling civilian career.”   Since 2008, Work Vessels for Vets has equipped over 1600 veteran-entrepreneurs with over $2 million in tools to start a civilian business.

“When Cathy called for assistance in transporting the tractor, I was immediately willing to help this hero,” offered Rod Hathaway of Maine Trailers in Hampden.  “She explained the mission behind Work Vessels for Vets, and it aligns with our desire to give back to our community.”  Hathaway immediately responded with his offer to provide free pick-up and delivery of the tractor to Jones’ farm in Glenburn.

“We are proud to support Work vessels for Vets, and we commend the work they are doing to help veteran entrepreneurs,” said Bob Forrester, President and CEO, Newman’s Own Foundation.  “Our men and women in uniform make great sacrifices in their own lives to protect the unique freedom and opportunities we enjoy as Americans, and it’s a privilege to express our gratitude for their service.”

Jan Schaefer, Newman’s Own Foundation Director of Communication may be reached at 203-702-4768.

Maine Trailer, Inc. has been helping consumers and businesses stay on the road with trailer sales, leasing, parts, service and registrations since 1985.  With skilled staff, a one of a kind mobile parts showroom, four service bays, large leasing fleet, and the best trailers in the business, we want you to think of us as your one stop trailer resource.  Visit us at www.mainetrailer.com for more information.

Since 2008, Work Vessels for Vets, Inc. has equipped over 1600 veterans from all 50 states with equipment for self-employment valued at over $2 million. WVFV has earned the prestigious Top NonProfit Awards each year from Great NonProfits, as well as achieving the coveted PLATINUM highest rating from GuideStar. To learn more or give to Work Vessels for Vets, Inc, go to www.WVFV.org.