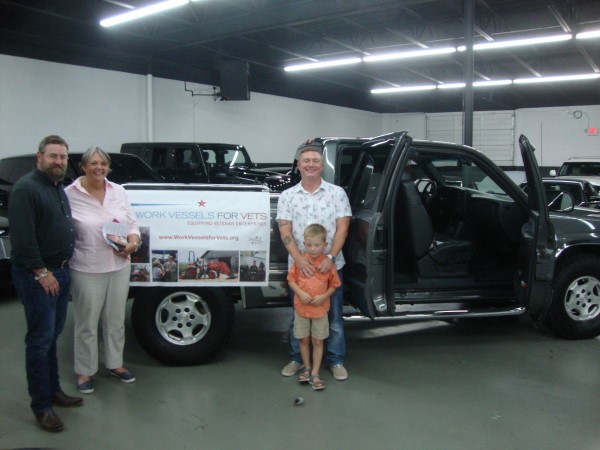 Marines are tough, and their combat experiences are tough. Coming home from war is also tough.  But for USMC Lance Corporal Philip “Mark” Rhyne of Morrison, Tennessee, the transition to civilian life is a little easier thanks to the gift of a much needed truck for his Tennessee equine rescue farm from the Connecticut based nonprofit, Work Vessels for Vets, Inc. and Music City Motor Sports owner, Sean Petty of Nashville, with funding from Newman’s Own Foundation.  Lance Cpl Rhyne returned to civilian life after deploying with 1st Marines 8th regiment, 1/8, to Helmond province Afghanistan. On February 10, 2012 he was the first to get to his buddy, Cpl Sean Adams who lost his legs and sustained other injuries from an IED explosion.    Mark struggled with PTSD for years following the explosion that left him with a 100% disability rating.  Like many returning vets, he didn’t want to make a fuss, but as he worked to regain balance, he turned to equine rescue and therapy for healing. But he desperately needed a truck.  Sean Petty, owner of Music City Motor Sports of Nashville stepped up and deeply discounted the Chevrolet Silverado he had just taken in trade. With Petty’s in-kind donation, along with matching funding from Newman’s Own Foundation, Work Vessels for Vets is able to make Lance Cpl Rhyne’s dream come true.