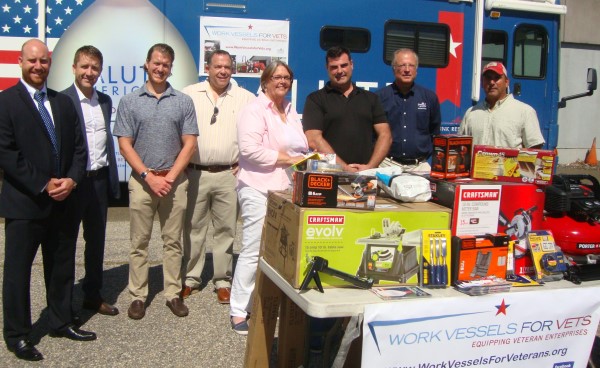 Connecticut's hero, Petty Officer John Wright (in black polo shirt), Navy Hospital Corpsman - “Doc” to the U.S. Marines during combat deployments in Afghanistan and Iraq, and member of the U.S. Navy’s elite Search and Rescue team, received tools worth over $1000 for his new business, General Handyman Service LLC, from Connecticut-based nonprofit Work Vessels for Veterans, which equips veteran-entrepreneurs. Funding for the tools is made possible by Salute American Vodka, a high-quality, American-made, craft vodka company, based in Branford, Conn., and Brescome Barton, Inc., one of the largest wholesale distributor of spirits, wine and beer in the state.

Veteran U.S. Navy Petty Officer James Wright, of Trumbull, Conn., served nine years as a Hospital Corpsman and a member of the Navy's elite Search and Rescue Team.  He was assigned to the U.S. Marine Corps to forward divisions in Iraq and Afghanistan where he was the "Doc" for 250 combat Marines, providing aircrew and emergency medical care in support of search and rescue missions. Wright was responsible for daily medical operations and logistical support.  He also conducted training that aided in the rebuilding of the communities in Afghanistan and Iraq through patrolling, securing, policing efforts and community outreach by taking care of any patient in these war-torn villages. He's earned military decoration by the U.S. Navy and the U.S. Marine Corps.   July 2017